I reunited with an old girlfriend yesterday.

Okay not really. But the way I once felt about soccer it almost felt like reuniting with an old flame. She made it hard for me by raining throughout the game and punishing me with soreness in muscles I forgot I owned. But I won her back as she did me, at least for a week. 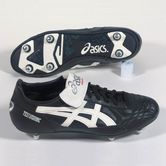 Last night I met up with two Brits to split a cab to Cho’sun University near downtown Gwangju to play soccer with other internationals in town. Because it was raining I called my new British friend Henry to make sure it was still on. “Sure” he said reminding me in his tone that rain never stops the English. After plenty of apprehension about getting back on the “pitch” (their words not mine) I strapped on my newly acquired Asic “boots” (their words not mine) and went to work. It was a high I haven’t felt since I played “proper football” (again their words not mine) in high school. Ever since then I found myself in leagues with has-beens with terrible attitudes. This group of guys brought little ego to the field. All they brought were their boots and the desire to play a competitive game.

We played 5 v. 5 on a small field (pitch) for about an hour and a half. We had to split into 3 teams consisting of one English team, one Canadian and one “Rest of the World.” The “Rest of the World” consisted of one Austrailian, one New Zealander, one Scot, one Russian and two Americans. I did not keep the official score, but I am pretty sure we won. We were anchored by the other American that played at Colgate in New York State and a pretty solid Austrailian. I even managed to play something that resembled soccer, or “footy” as everyone there but me and the other American called it. Today, when I found an FC Arsenal game on television, I found myself enraptured in the game. I don’t think I appreciated a game of soccer like that since University of Virginia ruled college soccer back in the mid-1990s. A reborn soccer fan overnight.

The Koreans definitely love their soccer, but from what I understand the local pro games are

anything but crowded. On the right is the South Korean’s prize soccer possession, Hong-Myung Bo. Bo was instrumental in South Korea making the 1994 World Cup in the US and kept them in contention with both Spain and Germany. He ended his career in the US with the LA Galaxy in 2005. Although it is unconfirmed, I bet now he makes a good living as a PC gamer.

Though I loved reuniting with soccer last night, she will never replace my new love, running. But I suppose I will take her on as my mistress while overseas. After all, all is fair in love and sport.