Well the SK Wyverns did it. They won the Korean World Series the other night in front of their Incheon based fans. The place went absolutely nuts. Fans cheered long into the night, the team ran around the field and more than one woman sobbed. It was a special win for the Wyverns who haven’t won the series since 2000.

It was kind of a cool celebration. Instead of soaking the coach with Gatorade, the team picked him up and tossed him in the air several times. An endless supply of confetti dropped from the rafters. 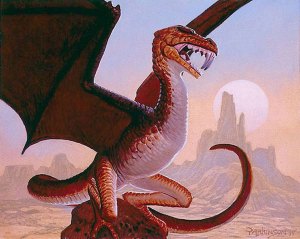 The SK in front of Wyverns stands for SK telecom the big cell phone company in the country. Our local baseball team goes by the Kia Tigers. You are the corporation that forks over big money first and your hometown second. I hope Western sports don’t come to this. I shudder at the thought of the Wal-Mart Red Sox.
But what you are really wondering about, I am sure, is what is a Wyvern? The short answer is a dragon. But to quote Wikipedia a wyvern “is a legendary winged reptilian creature often found in medieval heraldry.” Did you know that already? Cou-dork-gh.
This has to relate to gaming. Koreans are crazy about those video games that have everything to do with fantasy.
Harry Potter is also a hit here. I would even go as far as to say he is a sex symbol. One girl in my everyday seventh period class said I was “greasy” mainly because I don’t look like Harry. “Teacher, you have blue eyes and brown hair, not dark eyes and dark hair like Harry.” Like we said before, Koreans can be painfully blunt. It didn’t hurt my feelings though, I am still riding high on the Wyverns big win.