Annyong! Lindsay here.
Well, after Whit regaled us with his talk of mullets, I’m turning the conversation to something a bit more serious.
After reading in the international news (and in the Asheville Citizen-Times) about the young woman who was kidnapped and murdered (and beheaded!?!) while hiking in north Georgia, I couldn’t help but start comparing crime in the United States to that of East Asia.
South Korea has one of the lowest crime rates in Asia, and as you’ve probably heard, Asia has an incredibly low crime rate. There is virtually no crime here. It is the first time in my life that I have never worried about someone breaking into my home. Or attacking me at night in the street. Or on the trails where I always run alone.
It’s an amazing thing to feel totally safe. Don’t worry. I’m not being naive. I’m sure there is some crime here, somewhere. I think a taxi cab driver ripped me off one time. But that’s a common courtesy in most parts of the world.
After seeing the terrible news of the murdered hiker, Whit and I tried to come up with reasons why this sort of thing happens in America. Whit brought up economy, as I mentioned lack of education and a decrease in good family support systems.
But why in the world is it so low here? Why wouldn’t something like that happen here?
My first thought was that it is due to the lack of drugs in Korea. There are virtually no drugs here (other than prescription drugs.) I’m not sure why. So they do not have the crimes that always spur from drugs. (I can safely say most of the shootings in Asheville wer 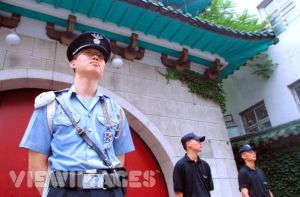 e always caused by a crack cocaine deal gone awry.) And more importantly, there are NO guns here. I mean none. The police officers don’t even carry them. And let me tell you, this is a wonderful thing. Wonderful. (But I won’t get on that soapbox, at least not in this blog.)
But after doing a little Google research, I read that the low crime rate originates from the ripple effect of Confucianism, which promotes shaming of a family when a member commits a crime, communitarianism, interdepedence, social dynamics, and a strong moral and formal education.
One of my Korean friends is moving to America soon to study for a year, and one of her first questions was, “How do I stay safe?” I had never given much thought to the larger likelihood of being gunned down in an American alley than on a Korean street. But I realized it was true. I simply told her, “Don’t do drugs.”
I think there is a lot more to it than that. But I have to say I respect Confucianism. It’s got its eccentricities. But apparently wearing a scarlet letter still holds crime at bay here in the Far East.