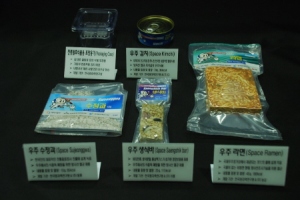 Lindsay here on a beautiful Saturday in Korea. A sunny, cold day perfect for shuttle lift-off. Though there are no shuttles shooting into space today (that I know of), there will be one in April carrying the first Korean to space….with his kimchi.

Check out this article from the Korean Times. And notice they don’t mention that fermented kimchi could possibly explode in space until the last paragraph (definitely not practicing the trusty old inverted pyramid journalism tactic.)

Several Korean meals are ready to go with Korea’s first astronaut in April, with the dishes receiving the go sign from the Russian space authorities.

The Korea Atomic Energy Research Institute said Tuesday that it recently received certificates from the State Scientific Center of the Russian Federation for four types of food. The Korea Food Research Institute is also developing six other menu items for the space trip.

The astronaut, Ko San, will eat kimchi, bean soup, rice and instant noodles as main dishes. Then he will be able to cleanse his palate with ginseng tea or sujeonggwa (cinnamon punch).With the certificates, Korea has become the only nation outside Russia and the United States to provide food for its astronauts, the atomic energy institute said. Currently, there are 157 items certified as space food, it said.

“We used radiation to sterilize germs, because microorganisms can be deadly in space,” said Lee Ju-woon, a researcher of the institute. “This method also preserves the taste better than thermal sterilization.”

Eating in space is a tricky task, because the lack of gravity makes it difficult to use cutlery and swallow liquid without the use of a straw. Space food must be engineered to be light, well packaged, quick to serve and easy to clean up. “Bread crumbs can damage the equipment because it is hard to collect them if they are left floating in the closed room,” Ko said at a press meeting in December.

“So most space foods are wrapped in plastic bags or in tubes,” he said, adding that he enjoyed eating them. The atomic energy agency first tried to pack kimchi in a vacuum bag, but made a last-minute change to have it contained in a metal can.

“The Russian space agency worried that the kimchi would ferment in space, causing the sealed bag to explode,” Lee said. “It can be dangerous if a bag of kimchi explodes in space, because no one knows whether the anaerobic bacteria in the kimchi is safe there or not.”

Ko, a 30-year-old computer scientist, will fly to the International Space Station in April on a Russian Soyuz rocket. He is to stay seven to eight days conducting various scientific experiments.