Whit and I always leave school at the same time and in the same fashion every day. As soon as Whit gets out of his extra English class at 4:10 p.m. (mine is in the early morning), we tiptoe out of the English teachers room where our nine co-teachers continue to work (I insist that we leave earlier than them since we get there earlier).

We barrel down the six flights of stairs and head straight to our shoe lockers where we kick off our black slippers (mine stylishly with heels these days) and race out the front doors before the bulk of students get out there and harass us about where do you live, what is your cell phone number, are you married, and can we play that game again tomorrow.

Every afternoon, we pass the same blue minivan, where the same sweet mother of six children waits patiently with her twin sister 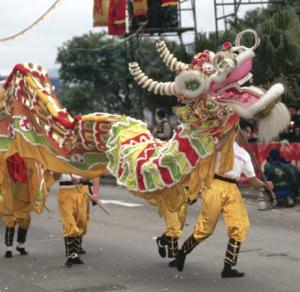 , holding her newest baby in the brood. Yes, six children. And as this sweet mother waits for her children to come rushing, hopping, hitting each other out of the school, she always sends one of them to chase after us every day with milk, or cookies, or candy, or yogurt, or bananas. Every day.

Six children is highly unusual for America. But picture six children in Korea, the land of two children per family and maybe. Just maybe. A dog.

And that’s not the best part. They are all boys. All. Six. Are. Boys.

The ones I know the best are Tom & Jerry, the infamous twin duo who look so much alike I only know them apart because Jerry constantly, relentlessly picks and prods Tom under the table.

I don’t know any of the other boys’ names. But that’s because there are too many of them. And they all look alike.

I once mentioned the boys to our co-teachers. “You know, there are like three of them, or maybe even four.”

“Ahhhhh! The Dragon Family!” they said. “Actually, there are six. The mother won’t give up until she gets a girl.”

And, they told me, this family is known as the Dragon Family because they have enough family members to orchestrate a sinuous, undulating Chinese Dragon dance.

I am really praying that this poor woman gets a girl next time around. I can’t imagine seven boys. But, then again, more kids means the afternoon milk and cookies won’t stop anytime soon.