This week in my middle- to high-level fifth grade classes, we’ve been learning about the words peculiar, bizarre, extraordinary and eccentricities.

We read a story about Mr. Ramos, a man who wears his baseball cap backward (gasp!) and listens to classical music when he works in the garden. But it’s his cat who is especially peculiar, as it likes to sing with the violins out in the garden. Mr. Ramos also likes to swing his arms like a conductor between hoe strokes.
This story–and the students’ own examples of peculiar people and habits (one girl’s sister regularly bites people: “She is very eccentricity,” said the student)–has made me think of all the eccentricities of my world. It just so happens I am the most normal person in the world (no comments needed) living in the most bizarre country in the world.
So for your amusement, here is a list of peculiar, bizarre and extraordinary eccentricities I have seen in Korea.
1. Koreans open the windows when and after they clean. Perfectly fine for summer. But then winter comes around and you can’t take your coat off at school. Every day I ask the same question to Whit. Why in the H.E. double hockey sticks (says Brittany) are the windows open when there is one inch of snow on the ground outside?!? Seriously this happened two days ago during our first snow.

According to one online forum, Koreans believe in ‘clean air’ and that you must have a through-flow of air to be healthy. It could be a throwback to the days when heating systems (primarily ondol) gave off noxious fumes and so opening windows and/or doors prevented carbon monoxide poisoning. But I’ve also heard that windows should be opened while cleaning and vacuuming to let the dust get out (apparently dust only flies one way).
2. Toilet paper is a sacred commodity. It must be. Because it’s rarer than peanut butter in this country. If you do actually have some available in a bathroom it’s “family-style,” meaning you have to tear it from the roll hanging from the wall before you go into a stall.
I find this terribly problematic. I can’t help but feel embarrassed every time I take it. Am I taking too much? Not enough? And what if I get in there and need more? What if I thought I only needed to do one deed but then once I sit down I feel the urge for something more?!?
Toilet paper is so special that one should not send it down the john afterward. It must be thrown into the small wastebasket. This is one rule I don’t follow. Don’t tell any Koreans. But seriously. It’s only come back to me (literally) once in a hotel in Thailand.
3. The lighter the skin, the better. Korea’s ethos is the exact opposite of America’s in regard to tanning. Koreans go to extreme lengths to protect their skin from the sun. In the summer, they wear hats, long sleeves, pants and face masks beneath umbrellas to keep their easily-tanned skin as light as possible. Of course, this comes from the fact that farmers are much darker-skinned from the sun and are characteristically poor and uneducated in Korea. Since we are at a private school with children from wealthy families, it is rare to see a tanned child in the summertime. I’m not sure if this is related, but Koreans also wear white gloves (think Mickey Mouse and/or Michael Jackson) for any task that involves the hands: cleaning, driving, cooking popcorn, etc. One of our co-teachers literally yelled at Whit to stop once when he was wiping off the table with a wet wipe. “Wear gloves!” she screamed. Dark skin and rough hands are characteristic of the poor. And everyone wants to at least look rich here. 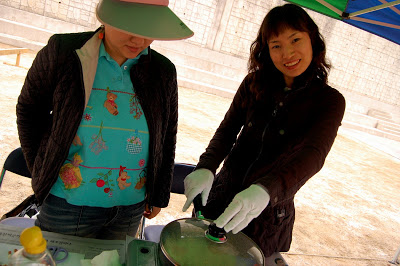 4. An image-conscious country with no dressing room mirrors. Image is extremely important in Korea. But not so important as to provide mirrors in dressing rooms. In every clothing store I have ever shopped in here (and I’ve been to a lot), I’ve never been so lucky to get a mirror inside the small dressing room (which is sometimes shared between three or four people.) You have to walk out from behind the curtain to look at yourself in a full-length mirror just a few feet away. Once, a dressing room attendee actually shook her head no at me in an unwarranted opinion. Thank you very much. Worse than my mother. And more than once, my room has been stolen from me while I have walked out in something so dreadful you’d never want to be seen in public in it just to realize, hey, you are in public in it, and hey, there is now someone else’s head poking up above the curtain to your dressing room.