Annyong!
It’s been a few days since we’ve posted but that’s because we’re on vacation and have been bussing and ferrying ourselves all over Korea.
But last weekend is what I’m here to talk about. We headed out on another one of our famous weekend island camping trips with our good friends. We originally were trying to get back to the island that Whit and Sam and Tony went to the weekend before last, but as we showed up to the ferry terminal, we realized that just wasn’t going to happen. We were lucky to get off the mainland at all. It turns out that Koreans all vacation during the same week. So that big ferry terminal that has been empty the last four months that we have been using it was now completely overrun with Korean families in big straw hats lugging behind huge coolers of Cass and kimchi.

The only place we could get a ticket to was Bigeumdo, an island just a couple hours away that we fell in love with the first time we went there in May. We were happy to be rerouted to such a wonderful place. It was a weekend like most of our other camping weekends with good times, lots of laughs, lots of beach time, lots of red skin, lots of mosquito bites, and a great campfire on the beach. (There are practically NO rules in Korea about anything….except for that whole don’t-throw-your-TP-in-the-toilet rule. which I can NEVER remember anyways.)

But the thing that made this trip complete and even “magical” as our British buddy Chris always says was the impromptu ride in the back of a Bongo truck around the huge island. As foreigners, we pretty much have to stick to one place. We have no car, and when the place doesn’t rent bicycles, we don’t have much option in sightseeing on these islands. But, lucky for us, we befriended some young Koreans who were camping next to us one night and invited them to play games with us around the campfire.

The next day, when they headed out to do some sightseeing around the island in a Bongo truck (the standard Korean pick-up truck) we couldn’t say yes quick enough. We all hopped in the back, slung our cameras around our necks, and hung on. We got to see the famous heart-shaped beach on the island (our next island camping destination in 2 weeks!) and Whit and the boys played a fun soccer/tennis game on the beach. 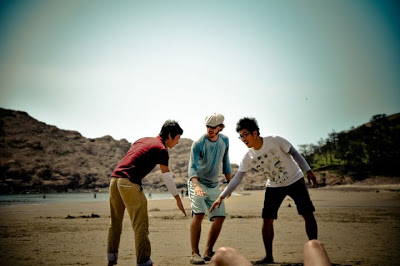 It was so fun that Whit and I stayed an extra day since we had the week off. But now we’re back on the mainland and in the polar opposite location of that quiet peaceful beautiful island. We’re in Seoul getting our visas stamped for India. INDIA! Can you believe it? 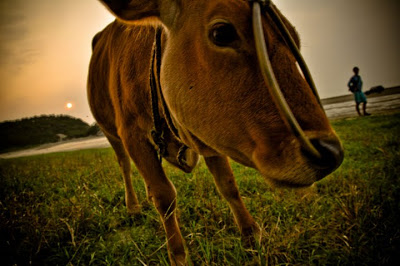 A little India in Korea. This cow on the beach was awesome.