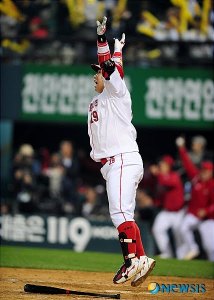 In the bottom of the 9th, with a 2-2 count and tied 5-5 with the defending champion SK Wyverns, outfielder Na Ji-Won nailed a pitch from Wyverns pitcher, Chei Byung-youg, to the left-field seats to win the Korean Baseball Series for the Kia Tigers of Gwangju.

Kia struggled early, not getting a runner on base until the 5th inning. In the sixth inning, SK went up 5-1 making things look bleak for the Tigers. Na tied the game in the bottom of the sixth inning with a 2-run homer and then blasted his walk-off a few innings later.

Kia, who had a losing record the last two seasons, finally put the pieces together to beat the Wyverns. While the Tigers ailed in 2007 and 2008, the Wyverns won the Korean Series back-to-back.

As Na’s homer sailed to the stands, the crowd went crazy, the announcers went nuts and Gwangju beamed with pride over the Tigers for the first time since 1997. The Tigers hold 10 KBO titles more than anyone else, but it is their first since Haitai(a food company in Korea) left and Kia(you know, the car company) took over the club.

I wish I could have been there in the Hite and soju soaked stands, munching on dried squid, fried chicken or a boiled egg, hugging random Gwangjuites, drinking to my health, the Tigers and Na Ji-Won. Maybe next year.

Either way it’s great to see the Kia Tigers back where they should be. Great job Tigers! Nice homer 나지완!! Great season Tigers! Go V10 Tigers!