It wasn’t until our second year in Korea that we discovered the beauty of railroad travel in Korea. We stuck strictly to the roads traveling to other parts of the country by the extremely efficient bus system. It wasn’t until well into our first year that we realized we were a short walk from a local train station. Then somewhere near Chungju Lake, on our Korea Without a Care tour in the summer of 2008, we took the train due north. It was beautiful, scenic, full of families on summer vacation and way more relaxing than the bus. We were hooked.

After that trip, we traveled by train as much as possible. Unfortunately, trains don’t run as frequently nor as directly as the buses, but to us the scenery more than made up for the waits and long trips. There are slower and cheaper trains that reach more small towns and parts of Korea than the faster train, the Korean Train Express (KTX). It isn’t the most efficient rail line in the world, but it does the trick and can take you many of the places the bus can, but with a much better view and in a calmer manner.

The KTX on the other hand is fast but covers less of the country. It cuts a normal car trip from Gwangju to Seoul almost in half by reaching speeds up to 300 km/hr or around 180 mph. That train can roll. The KTX can be twice as expensive as the bus or slow train to Seoul. Yet it is sleek, fast and comfortable. The downside to the KTX is that it only travels between Seoul and Mokpo or Seoul and Busan. 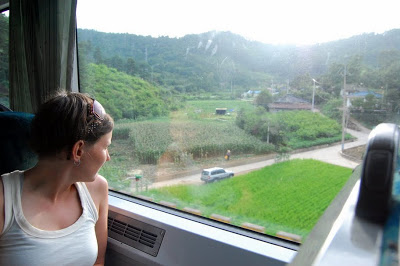 The most fun part for me is that Koreans are more willing to engage with you on the train. The buses aren’t exactly perfect for socializing, but on the trains Koreans eat, drink and talk to whomever they want. I have spent train trips talking to a man that knew as much English as I did Korean, eating food given to me by Korean grandmothers and trying to help Koreans with their English. I happen to love the random interactions. 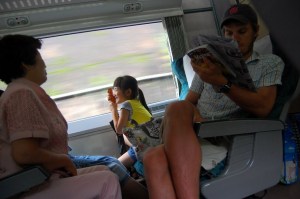 What to do on the train?

1. Look out the window. The Korean countryside is downright beautiful.

2. Drink beer. Most trains have a dining car complete with the Korean nectar, Hite.

3. Sing. Some lines even have a room where you can sing with 3 or 4 of your closest friends.

4. Talk to a Korean. It might not be easy, but chances are you will learn something interesting or get invited home to dinner.

6. Listen to traditional Korean music on your iPod. Kind of gets you pumped up about being in Asia…or it does me.

7. Sleep or read a book. The clackity-clack is perfect for both.

The better option is to call 1330 for information. They can tell you timetables and train routes.
http://www.korea4expats.com/article-informaton-help-line-1330.html