I am rooting for Kim Yu-na this February in Vancouver. I know that isn’t very patriotic, but I can’t help it. She is beautiful, graceful and very fun to watch. After one performance, I guarantee that you will be a Yu-na fan too. 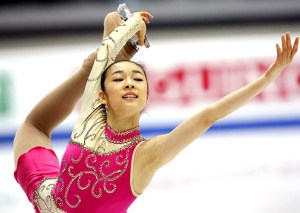 She is the current World Champion and Four Continents Champion, setting world records at both. Just a few weeks ago she won the ISU Grand Prix in Japan. In fact, Yu-na has won every competition she entered in 2009. Which also includes the Trophée Eric Bompard Grand Prix and the Skate America Grand Prix.

In Korea, she is the hottest thing going right now. Always on television and always on the tips of Koreans tongues when you ask about anything Korean that makes them proud.

Kim Tong-hyung, a staff reporter for the Korea Times summed up Kim Yu-na’s impact on Korea last week in a wrap-up of the year. Kim said, “H1N1 influenza wasn’t the only epidemic to hit Korea in 2009, as makgeolli and Kim Yu-na shook the nation just as hard, as shown in a survey from a local think tank.”  Kim went on to say “Flu-themed products, such as surgical masks and sanitizers, came in second, followed by Kim Yu-na, the 19-year-old figure skating starlet and television commercial queen, who now appears to be the country’s most transcendent personality bar none. “

Check out Yu-na skating to James Bond music at Skate America this year.