Probably the most important advice I can give someone on their way to Korea is to be flexible. You have no idea what each day will bring. The language barrier, the last minute planning and just the strangeness of being in this eastern culture requires a flexible attitude.

Luckily, I am flexible. But even yesterday as I found myself at the starting line of a half-marathon, in a Gwangju Eodeung Marathon Club singlet, rubbing the shoulders of the man in front of me and feeling very lucky that I decided to eat breakfast earlier that morning; I couldn’t believe how my morning had blindsided me.

Last Sunday we accidentally ran into a running club while my little running club was out on our Sunday run.  This group of men, with one or 2 women, insisted we join them the following Sunday in Jangseong, a small town just 30 minutes outside of Gwangju. From what I understood, on Sundays they ran for a while and then gorged themselves on good food and makkoli. How could I possibly not join? 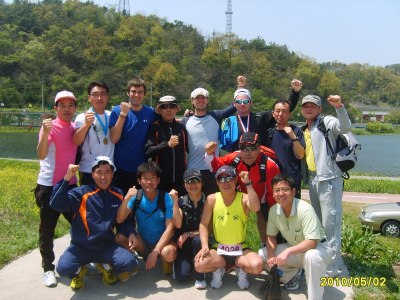 So all week I thought we would be joining a casual run.  Two other foreign guys from my club decided to join and we hopped in the back of a club member’s Hyundai at about 7AM yesterday en route to Jangseong.

As we pulled into town our first clue that we had unknowingly agreed to an organized race was a kilometer marker on the road.  “Is this a race?” Jon asked me as I had been the liaison for the group.  “Huh,” I stupidly replied, “It appears that it is.”

We were assigned bibs, stretched with the team and toed the line with the group.  After a beautiful run through Jangseong with lots of farmers and children cheering us on through their rural, mountainous town.  I couldn’t help but wonder if any of them had seen me last year when I was pulled onto a stage in their town and asked to sing a Beatles song on their karaoke machine. Too flexible?

After the race we ate and drank an endless supply of kimchi, tofu, raw fish, pork, lettuce wraps, rice and makkoli. I drank with my new friend who I ran silently beside except for the occasional grunts of approval and encouragement we gave each other as we struggled over hills in the hot sun.

Sitting around trying to understand what my new friends were saying to me in Korean I realized that this was one of my favorite races ever and it was followed by the best post-race party I have ever been to. I also wondered what other races I was agreeing to in the future.