Skip to content
Last night I found myself on a lovely little street in a hip bar drinking a nice beer with a friend. For a fleeting moment it felt like being at any bar in any gentrified part of any wealthy American city. But it wasn’t. I was parked almost right in the heart of Daegu, South Korea at a little place called Percent.
Percent is brand new. So new, in fact, that they’re still working on it’s interior design and menu. This week has been a soft opening for the bar that has taken months to open.

I took the Daegu metro to Kyungpook National Hospital stop and walked south. On the way, my buddy and I snaked through Daebong-dong, a neighborhood of Daegu that is also in the beginnings of driving out the native Daebong residents with luxury apartment blocks going up at a rate only a Korean construction company can muster.

We walked through an old, forgotten market that lives beneath a decrepit looking Cold War era apartment. The white, paint-chipped building and small musty alleys of the market felt like stepping back in time. Old women sat watch outside of boarded up shops, kimchi pot stores, the tailor’s and a shop that looked like it could service your old Casio watch or Toshiba calculator.

This juxtaposition is Korea. Modern and old. Korea can hardly keep up with it’s own growth. At times it’s uglier for it, but I can’t help but love this Korean story. Here is a country where many grandparents are still farming with the faintest notions of the internet, while there grandkids plant their faces in computer games and Kakao talk.

The generation gap here between grandparents and grandkids is more akin to me and my great-great grandparents. I am fascinated by this stark contrast and it reveals itself everywhere in the country. As we came out of the market I silently mourned the day when old Korea dies out.

But Korea marches forward and so did we. We came out onto an up-and-coming street in Daegu: Daebong-ro. This street is lined with open air barbecue restaurants, hip coffee shops, trendy eateries and intriguing bars. 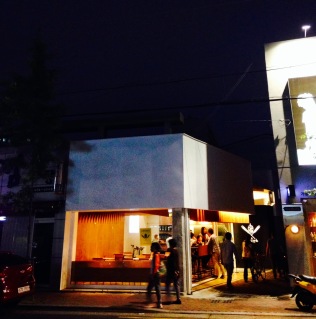 I met up with my buddy Jess, who along with Chris at Mesh Printing, cooked up the sleek logo for Percent. The bar is small and has the look of the really interesting coffee shops that are starting to spring up in Korea. It’s open air, wooden walls, clean and with a ceiling that looks like something out of an opera house. Mesh’s logo and the space fit nicely together. It’s classy, cosy and hip. It was a great place to saddle up to the bar and drink a cold pint.

The beer was also pleasant. While they don’t brew at Percent, they are looking to carry craft beer. Last night I spent my money on Bill’s Pale Ale. Bill’s is brewed by an ex-pat at The Booth in Seoul. I can’t give you a connoisseur’s review of the beer other than to say it was well worth the 6,000 won.
There will be more beer and food on their menu. Be on the look out for Magpie, Punk IPA and beers brought to you by Craftworks. I’d check it out soon, while they(and their neighborhood) are still trying to figure it out their identity and while old Korea still looms in its shadows.

What do you think? Cancel reply

This site uses Akismet to reduce spam. Learn how your comment data is processed.